HARLEY is in the house! 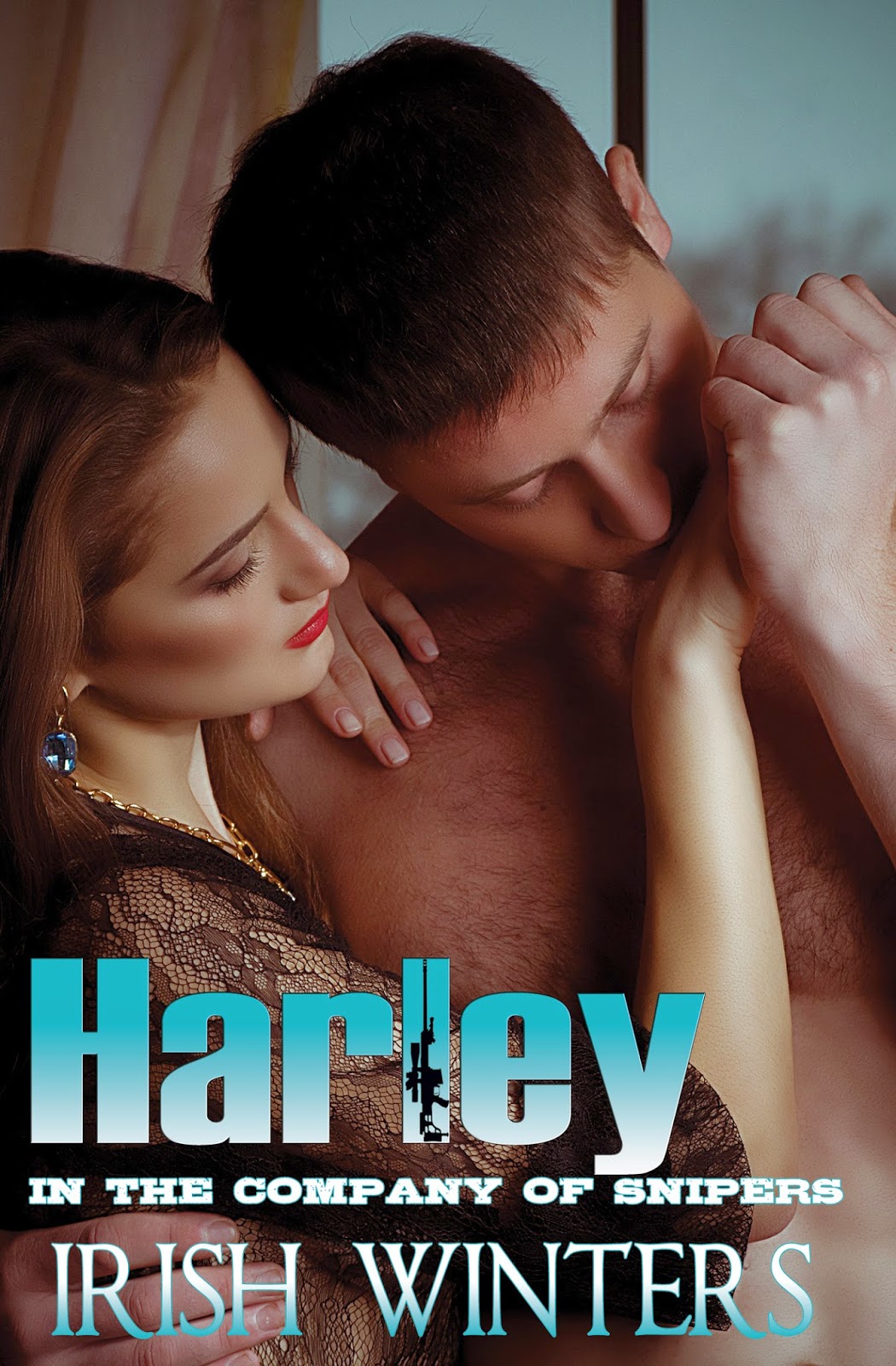 Amazon print edition link:
http://www.amazon.com/Harley-Company-Snipers-Irish-Winters/dp/0991069366
Posted by Irish Winters at 4:18 AM No comments: Links to this post 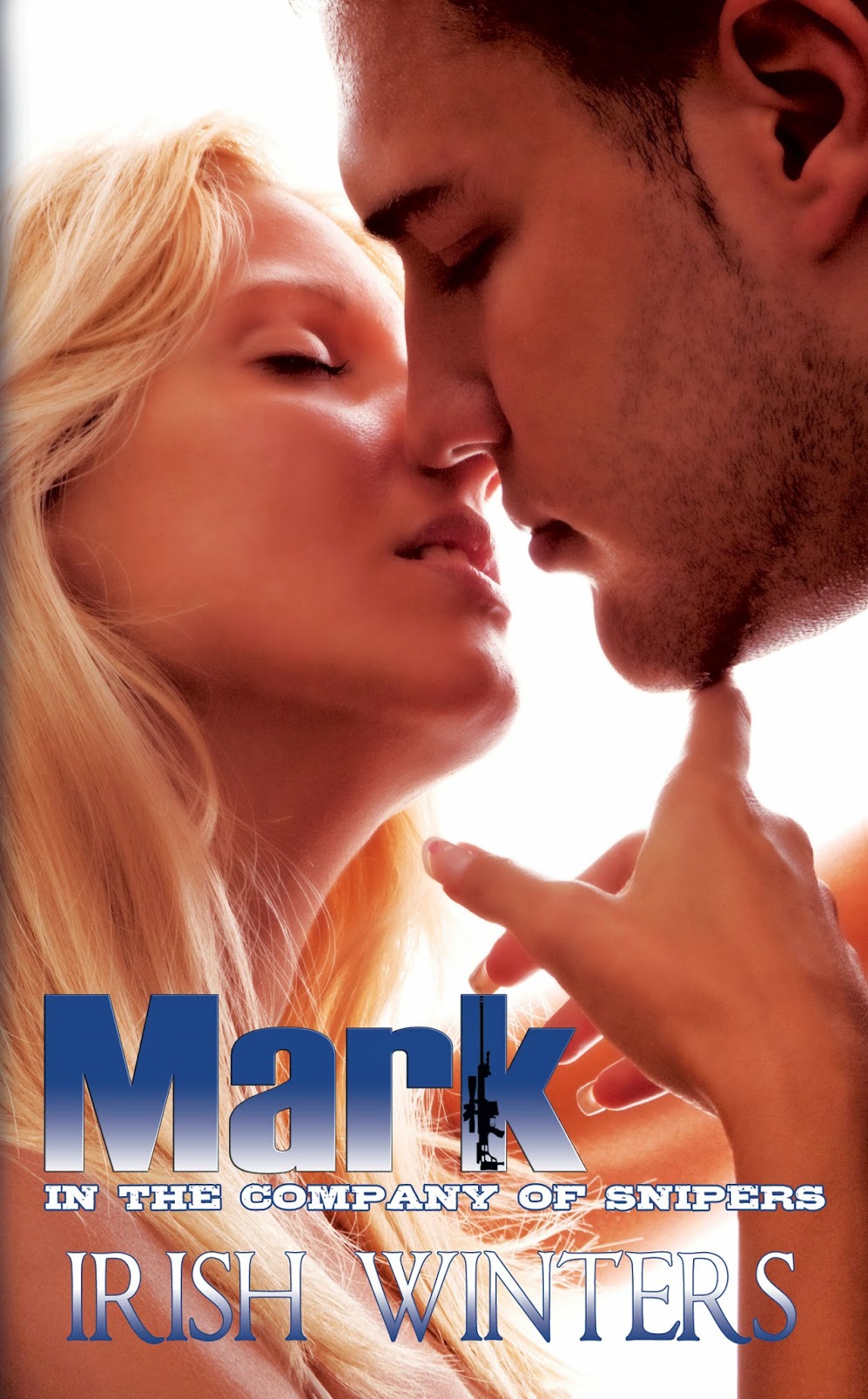 Posted by Irish Winters at 4:37 PM No comments: Links to this post

It's going to be a FaceBook Blog Tour party!


There will be prizes, grand prizes, an over abundance of really good trivia,
but best of all…. (drum roll please) ……
There will be HARLEY!!!!!

Come join me on each stop of the BLOG TOUR

Stops will be posted on the FaceBook Party Page
Official Book Tour: Harley (In the Company of Snipers, #4) Irish Winters 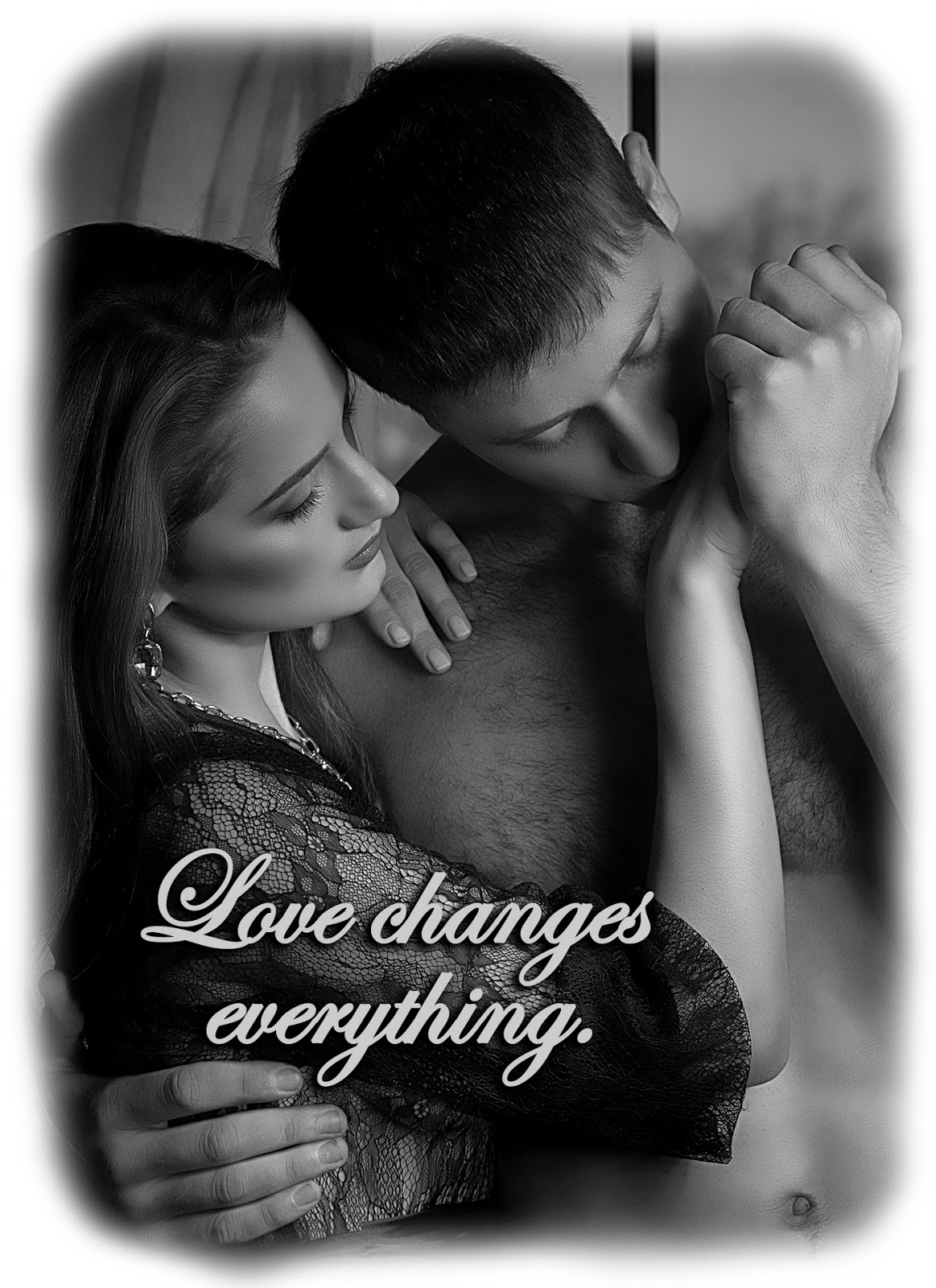 BLOGGERS - CONTACT -- amydelrosso@gmail.com OR- sign up to be a Blog Tour Host or hostess @  http://eepurl.com/EUr21
(The schedule will be posted on the tour page and all information will be emailed to all participants in sufficient time to prepare for their stop.)

One of the side effects of either my genre, military romance, or possibly my writing has become the men and women, the military members and veterans whom I've personally had the privilege to meet, either in person or through social media.

Today I was personally contacted by one of my all time favorite authors, Mr. Stephen Templin, who co-authored 'SEAL TEAM SIX - Memoirs of an Elite Navy SEAL Sniper.  It is the true story of SEAL Team Six operator, Howard Wasdin during the Battle of Mogadishu, Somalia, 1993.

All I can say is - WOW. I am star struck and humbled for Mr. Templin's service, dedication, and love of my country.  Dr. Howard Wasdin's too. He is another one of my heroes, something he'll never know but that's okay. I have a lot of heroes like Mr. Templin and him. They don't need to know me. 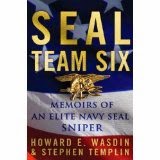 This book will touch your heart and ignite your love of country like no other.
Never forget.
Always be thankful for the real heroes.
Every. Single. Day.

MARK, In the Company of Snipers, Book 2
Kindle version will be free on Amazon.com 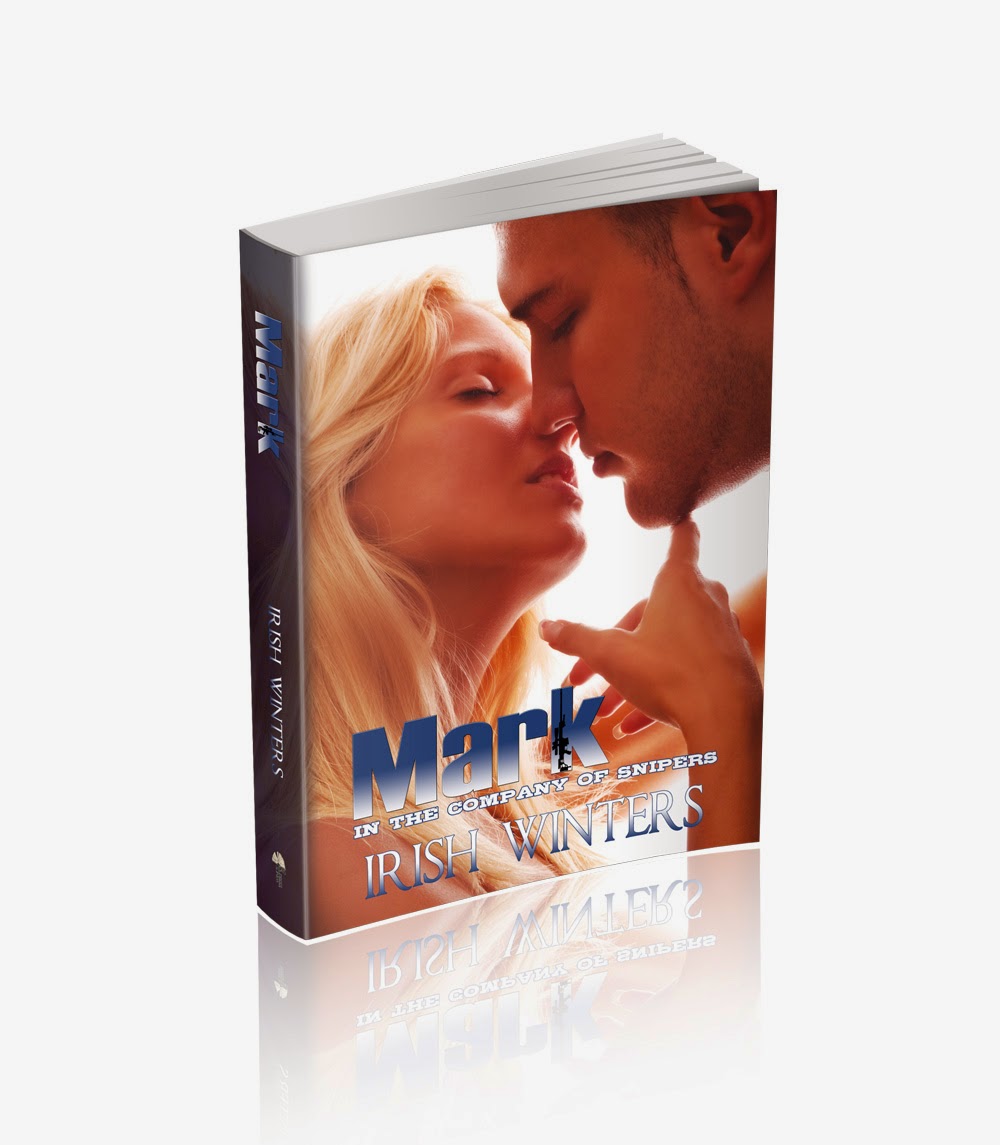 Mark Houston has done the unthinkable.
The United States Marine has fallen in love with his best friend’s fiancée. Now he has to tell Libby Clifton that Jon was killed in action. When Mark accompanies his friend’s body home to the quiet farming community of Spencer, Wisconsin, he discovers that all was not well between Libby and Jon. He dares to hope there might still be room in her heart for him—until she confides in him that he’s the only friend she has—the very last thing a man in love wants to hear.

She’s trying to move on.
After the very public funeral of her war hero fiancée, Libby Clifford trades the sedate country life for nursing school in big city Chicago. Little does she realize that kilos of opium lay six-feet underground with the man she’s just buried. The cold-blooded cartel boss has proven he will go to extreme lengths to get his drugs back. Mark Houston, now working for Alex Stewart and his covert surveillance team, is determined to protect Libby. Three paths are on a collision course of murder, deceit, and betrayal.

Posted by Irish Winters at 10:10 AM No comments: Links to this post

Harley, In the Company of Snipers, #4

Harley is in the last round of edits and giving me the evil eye.
The man needs to be published, so….
It's time for a hint of things to come. 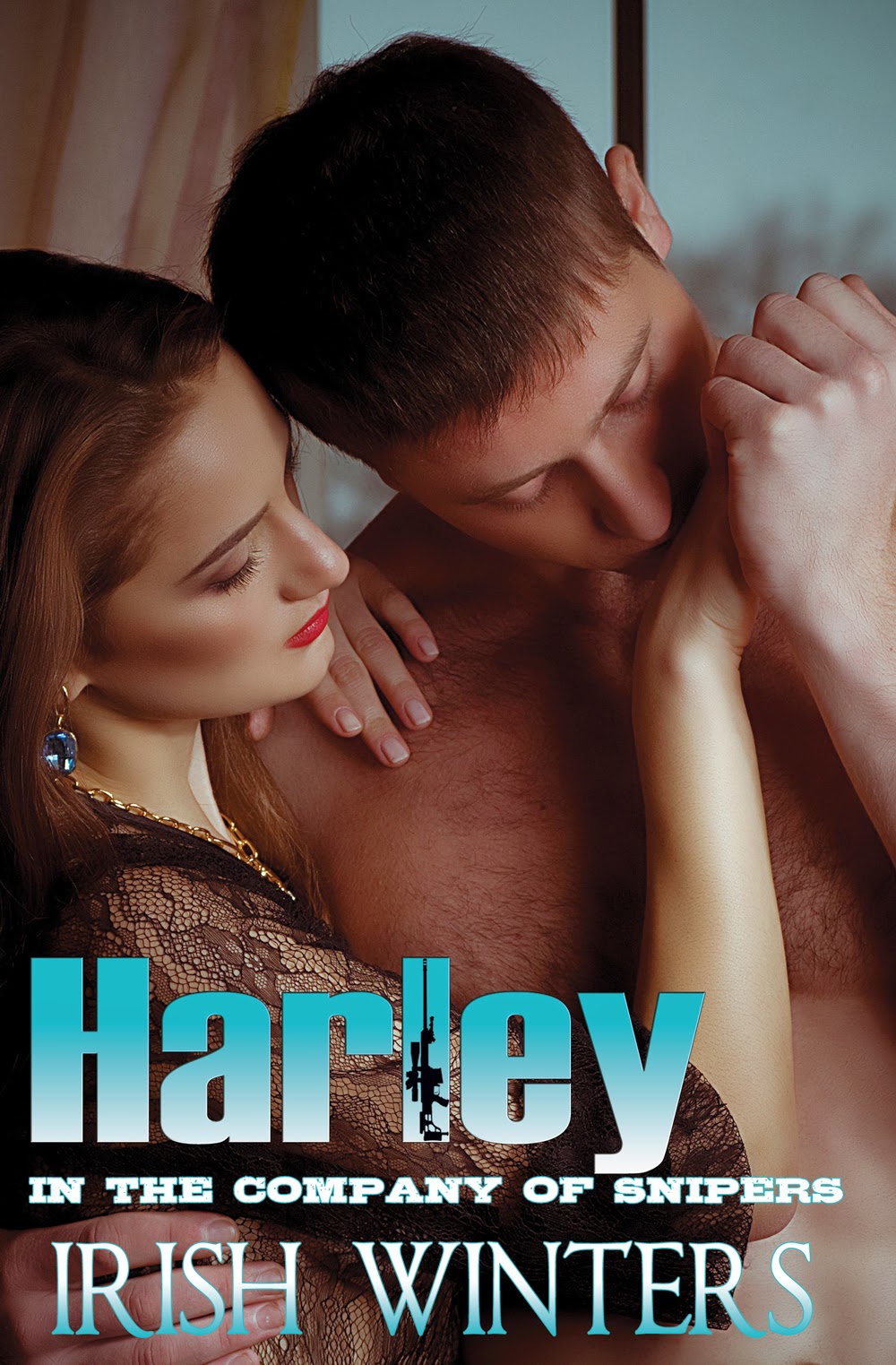 Thunder shook the ground. Shrapnel and bullets pinged too close and personal, pushing him to act. So that’s the way it was, under fire and his men forced to leave him behind. He was alone. Instinct kicked in. Training took over.
Move it, soldier. Move it. Move it. Move it!

He steeled his jaw, stiffened his spine and secured his belt around his own bleeding leg, padding it with a rag from the dirty ground. The chemicals in the smoke provided an acid eyewash that would not quit. He could barely see to stagger away. His feet would not follow. No matter. He carved a drunkard’s path into the desert and away from hell. One more step. Then another. Time and distance. All he needed now. Three things were sure. He wouldn’t be taken alive. He’d live to fight another day. And he’d catch up with his men.
Keep moving!

Confusion and guilt ruled the day. It sure looked like his men were dead back there. He was sure they’d begged for help. But then they were gone. That meant they were alive, that they walked away. Didn’t it? Parts felt real.
Parts did not. Like that detached hand. How could those fingers tap like they were attached to Kent when they weren’t? Harley collapsed against a wall. Scrubbing the pain away, he tried desperately to remember or forget. The puzzle remained. Hadn’t he seen this same damned movie before?

The last word, that name tugged at his weary mind for further scrutiny. It meant something. He could tell. It was a pleasant name. Like the piercing beam of a lighthouse cast high above the pitch-black storm in his head, it called
to him. ‘Look at me. Remember me.’

Harley sucked in another breath of desert air, his soul whipped and beaten by the war. Who the hell is Judy?

Look for him early September at Amazon.com, paperback and kindle ebook!

Posted by Irish Winters at 5:03 AM No comments: Links to this post

Okay, so I did not sell a gazillion books.

I did better than that! I met more heroes. Actual heroes who served and are proud of it.

I got to meet L.A. Green, a Korean War Vet who taught me some self-defense moves
right there in our author's booth. Wow.
And the poster he gave me on America? Priceless.
It's going on the wall of my office beside George Washington's Prayer at Valley Forge.

I got to meet Bill, another veteran of the Vietnam era who thought he didn't like romance. Ha.
I could see it in his wife's eyes. They've been married thirty some years.
That guys definitely knows something about romance. ;)

I met Randall (Army) and Dystini - two names I could write a romance book about - and just might.

And so many more.

Big lesson for me: I might be in a serious relationship with more than 14 fictional characters,
but I love the real men and women who served honorably even more.
It was my privilege meeting you and shaking your hand.
Thank you. Thank you. Thank you!

I had the best day….
Posted by Irish Winters at 6:37 AM 2 comments: Links to this post 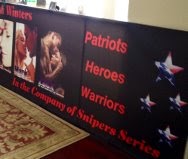 Posted by Irish Winters at 5:18 AM No comments: Links to this post